These celebrations happened on:

To listen to the audio of these celebrations,

This is the solstice, the still point of the Sun . . .
where the past lets go of and becomes the future; the place of caught breath.

Celebrate the BIRTH OF THE UNIVERSE . . .

Free!  All are welcome!

These celebrations happened on:

From time immemorial, humans have honored the winter and summer solstices, as sacred and rich times, to align our personal and collective lives with the movement of celestial bodies.  Some of us are heading into the darkness of winter while others are headed into summer and longer days.  Wherever you are, the solstice is a planetary event.

You’re invited to celebrate this time of “turning” with other deeptimers.

As we align with the movement of celestial bodies, the solstice can also be a time to celebrate the birth of the universe and the miracle of existence itself.  As part of our celebration, physicist Sarbmeet Kanwal will give us a short 15-minute presentation on how the universe emerged out of a primordial quantum field by breaking symmetry and creating “seeds” out of which stars and galaxies would later form.

He will also explore an uncanny parallel with seasonal solstices that resulted from a broken rotational symmetry that caused Earth’s axis to become tilted. The resulting cycle of seasonal renewal opened the way for the evolution of greater complexity. Life happens not because of perfection, but because of a breakdown that allows for reassembly into new relationships (communion) only to be broken again. It is the beautiful cycle of differentiation, subjectivity and communion that Thomas Berry talks about.  What a beautiful and instructive learning from the universe itself that can guide us in these times! 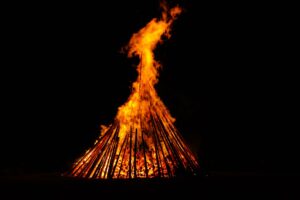 A solstice occurs when the Sun reaches its most northerly or southerly excursion relative to the equator. Two solstices occur annually, around June 21 and December 21.

The word solstice is derived from the Latin sol (“sun”) and sistere (“to stand still”), because at the solstices, the Sun appears to “stand still”; that is, the seasonal movement of the Sun’s daily path (as seen from Earth) pauses at a northern or southern limit before reversing direction.

Jennifer Morgan, president and founder of the Deeptime Network, is an award-winning author, storyteller, and educator inspired by the work of Teilhard de Chardin, Maria Montessori, Thomas Berry, and Brian Swimme. Her Universe Story Trilogy — Born With a Bang, From Lava to Life, and Mammals Who Morph — are used in classrooms around the world, particularly in Montessori schools as part of the Cosmic Education Curriculum, and have received the Teachers Choice Award, Nautilus Semi Finalist, highest ratings from AAAS and endorsements from Jane Goodall, Neil de Grasse Tyson, astronaut Edgar Mitchell, Thomas Berry, Brian Swimme and others.  She is Vice President of the American Teilhard Association.  Her life inspiration is to foster emergence by helping to link a planetary nervous system of people immersed in this radical new understanding.

Sarbmeet Kanwal is an award-winning college level educator and a pioneer in novel ways of teaching quantum physics and astronomy. He holds a PhD in Theoretical Physics from the California Institute of Technology. His aptitude for explaining, in everyday language, intricate concepts in cosmology has made him a sought after speaker among both scientific and non-scientific communities. Last year he was selected from hundreds of applicants to make a speech titled “Chaos to Cosmos” at the highest rated TEDx event on the East coast. Sarbmeet is a long time board member of the Monmouth Center for World Religions and Ethical Thought where he helped initiate several interfaith projects including the cofounding of an award winning youth leadership program called MOSAIC. Strongly influenced by the writings of Brian Swimme and Thomas Berry, he is the founder and leader of a popular study circle centered on the New Creation Story.

Margie Abbott, RSM is based in Geelong, Australia. With experiences in education, spirituality, theology, and counselling, as well as psychodrama, Margie values highly inner independence and capacity development. She integrates action methods, myth, creation centred spirituality and ritual to enhance her work. Through her private practice, “Igniting Sparks” she works extensively with retreats in eco spirituality. Recently Margie published her latest ritual book entitled “Cosmic Sparks: Igniting a Re-enchantment with the Sacred.

Sally Neaves is an educator and facilitator of Earth literacy, the Universe Story and eco-spirituality programs and rituals based in Bathurst NSW. For the past 5 years she has developed programs for the Rahamim Ecology Centre and now serves as the Integral Ecology Animator for the Institute of the Sisters of Mercy of Australia and Papua New Guinea.

Be the first to review “Solstice Celebration 2020” Cancel reply